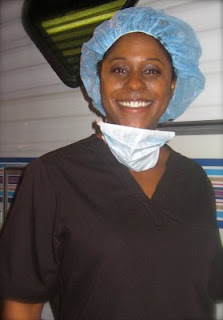 (PICTURE IS FROM MY "ER" SHOOT A COUPLE OF WEEKS AGO.)

So, my 12-hour "ER" shoot made for a loooong day, but it was A-W-E-S-O-M-E! I got to work with Director John Wells, and actors Noah Wyle, Eriq LaSalle, and Christian Clemenson (best-known for his work on "Boston Legal"). I spent about 10 of those hours on my feet, and those once-comfy clogs were merciless, but I didn't EVEN care. When I arrived, I had about 10 minutes to change clothes and then was shuttled to the stage where we were to shoot the scene. I was introduced to Dr. John W. Fong who taught me the proper way to intubate a patient (I was playing an anesthesiologist). I practiced on a stand-in until Noah Wyle arrived, then I spent the next 9 hours sticking stuff into his mouth and taking it back out again. He told me "Just don't break my teeth and we're cool." No pressure at all. Everyone was really nice. Especially John Wells. And Christian Clemenson recognized me from from "Boston Legal" - He asked "Wasn't that your first TV gig?" (How did he remember that??) I told him that it was and that I figured if I just follow him from set to set I'll do okay. He laughed. (I think he thought I was joking, lol.)

I've been told that a lot of big names are going to be in this episode, so they are expecting high ratings. I don't have the date yet, but it's episode 19, and it is supposed to air in late March. Watch for it. I have a mask on throughout the scene, but I'm the only dark-skinned black woman, so I'll be preeetty easy to spot.

I'VE ALSO JUST BOOKED a little role in David E. Kelley's new pilot, "Legally Mad". I was sick when I got the audition call and thought about calling to cancel because I wasn't sure I'd be at my best and I didn't want to expose anybody else to whatever "bug" I might have, but I decided to go and just not cough on anybody. Good thing because I BOOKED IT! Like I said, it's a little role, but my 'little role' on Kelley's show "Boston Legal" turned into a recurring role, so who knows?

I was going to share some thoughts about the celebs that have been falling from grace lately, but this has already gotten long, so I'll save it for another time. A-Rod, Chris Brown, Michael Phelps...my thoughts are probably not what you would expect. I'll comment later.