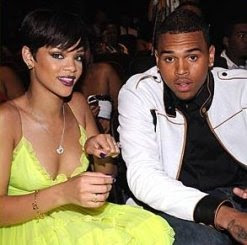 I had said that I was going to comment on the Chris Brown/ Rihanna situation, but then I figured the time had passed. Over the weekend there were reports that the pair had gotten back together, and they were talking about it this morning on "The View," so maybe I can still weigh in.

Abuse is not okay. Ever. Men hitting women, women hitting men, people beating children or elderly people. It is never okay. Without even knowing the circumstances surrounding this couple's situation (and yes the details ARE pertinent), the reports and allegations saddened me.

That being said, I was even MORE disturbed by the public's reaction to the situation. Rumors circulated (about them both), people called for Chris Brown's music to be taken off the air, and were angry that the full basket of the couple's dirty laundry had not been tossed onto the front lawn.

Truth is: It really isn't any of our business. We don't own these people, and the details of their lives are not paid for and downloaded with their albums. The fact that we no longer separate the art from the artist is an issue that has long bothered me.

World-reknown painter Vincent Van Gogh was insane, yet none can dispute his artistic genius, and to deny the world his art on the basis of his personal life would do a disservice to the public.

To get more contemporary: R. Kelly, Michael Jackson, Britney Spears, Halle Berry, Robert Downey, Jr., Michael Phelps, James Brown, Samuel L. Jackson*... they have all trangressed at some point. Does that erase their accomplishments? Readers: WE have all transgressed as well - does that negate OUR accomplishments?

Celebrities are not necessarily "role models" - they are just well-known. I think if we all focus more on what WE can all do to set examples and guide the impressionable beings whose lives we touch directly, the lives, sins, and antics of those whom we DON'T even know will have less of an influence.