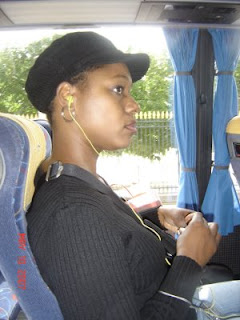 <---Me on a tour bus in Paris.
I've been thinking about my grandmother and great-grandmother lately. Both have passed on, but their lessons are still very much a part of me. They have never been far from my mind, but their increased appearance in my thoughts has led me to wonder what it is that I need to know at this time.
Snippets of conversations from the past have come back: me as a little girl expressing my need to travel to my grandmother - I told her I was going to move to Hawai'i (which was the farthest place I could think of at the time), and she faked a cry & told me that if I moved to Hawai'i, she wouldn't be able to see me. I didn't like the sound of that, so I decided to stay put for a while longer. My great-grandmother constantly telling me how proud she was of me and how I was a smart girl, which was nice, but not really appreciated because I would much rather have been told I was 'cute.' My grandmother not believing that I was really moving to Los Angeles in a month because I had no money and no plane ticket.
Here I am. Not in spite of their teachings, but because of. Today other snippets resurfaced: Stories of racism: My grandmother, the most intuitive healer I have ever known, being denied admission to nursing school because they had enough black people. No matter that the class was not full - the spaces that remained were not for people with her skin color. Stories of strength and resilience: My great-grandmother giving birth at home and cutting the umbilical cord herself. Both had been tried by fire, had survived, and thrived. They, along with my mother (who is still very much alive and an integral part of my life), built me out of resilient stuff. They taught me that I could do A-N-Y-T-H-I-N-G. When they realized I actually believed them, I think it scared them a bit, but it was too late to stop me. I had the torch firmly in my grasp.
Here I am. I have a college degree. I've sung with a guitarist in a Parisian café. I am going to Russia. I don't have to rely on anyone for my financial well-being. I have a beautiful flower garden. The world is my oyster. As long as I'm on this side of the dirt, I can do whatever I decide is worth doing.
Here I am. Living in Los Angeles, making a living as an actress. I have everything that I need. Every. single. thing. And I had to sit back and let that admission wash over me. Though they both had the opportunity to see me in a few plays, neither had the chance to see me on TV. Still, there's no doubt in my mind that they knew I would make good on my plans. Not because I'm more inherently worthy than anyone else, but because I refuse to believe that I am less worthy than anyone else. That knowledge is a gift that they gave to me, and I didn't even know what I had until now. All things are revealed in their own time, and at this time in my life, I can truly appreciate knowing that I am exactly where I should be and in this moment, things are exactly as they are supposed to be. I usually say that I'm happy despite the fact that my life 'is not perfect,' but I'm thinking that I need to re-define 'perfect.'
--Nicole
I am still blogging at Backstage's "Unscripted." Please be sure to check me out! ;o)