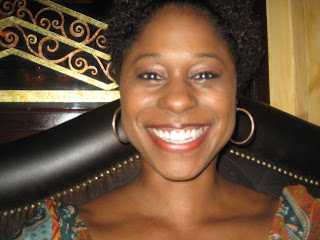 Okay, so we are all taught to be polite, right? Well, I do try, and most of the time I succeed, but sometimes you just gotta do (or say) what IS. Most people know me to be honest, but usually tactful, but honesty a recurrent theme for me right now. As artists, we are at our best when we are completely open and honest, however, that usually doesn't play too well in society. The answer to "Do these jeans make my butt look fat?" may be "Yes" but the vast majority of us will think twice before stating it, if we tell the truth at all. We go along to get along, and those who don't are considered rebels, rabble-rousers (okay, 'trouble-makers'), or weirdos.

This morning I had a commercial audition with three other women. Our characters were based on the "Sex and The City" characters. We all read over the sides, assuming that we would be assigned a character. The casting assistant told us we could choose amongst ourselves who would be which character. We all paused, then I spoke first, telling the other three women that I wanted to be the "Mandy" character (who was based on Sarah Jessica Parker's character in the show). RADIO SILENCE. (Cue crickets.) One of the other women said she had wanted that character too. PAUSE. But that she would take a different character. Now, during that pause I was questioning whether or not I should just let her have the "Mandy" character. I decided that I felt most comfortable with that character. It had nothing to do with the fact it was based on SJP - I just thought the lines of that character fit me well enough that I could sink right in, and add my own flair without doing too much thinking about it. So I said nothing. PAUSE. The next woman said "I think we ALL wanted that part." PAUSE Social niceties may have dictated that I said "Oh, go ahead and take it, and I'll do something else." but in reality, I was thinking "Bump that. You should have spoken up." There was more back and forth between the other women, but they all chose their parts and I think we ALL did well. Honestly.

Even as I type, I feel like it sounds "ugly," but why? I didn't step on anybody to get anything. I just expressed how I felt and held my ground. I've been thinking about this all day, and the other ways that "honesty" comes up in my life.

I am trained in the Meisner Technique (and currently taking a refresher course), which defines acting as "The ability to live truthfully under the given imaginary circumstances." The scene is the given imaginary circumstance, and the actors job is to translate it emotionally so that s/he can react to the circumstance as if it were real. In doing this work, the actor learns to instinctually recognize the truth of a situation, and react to it instead of responding from a more socially correct place. "Do these jeans make my butt look fat?" If they do, then "Heck yes, they do!" Comes the answer without any thoughts of whether or not it is polite. Got me?

Being back in class is making me revisit a lot of things that I learned and have put into practice, as well as some things that I learned and DON'T practice. I have always considered myself a student of life - always questioning, learning, exploring. What I NOW realize is that I have managed to become a teacher as well. As the eldest of 7 daughters, I have always been in the position of being "the responsible one," or even "the bossy one." As I learn, grow, and get 'better,' I just feel compelled to share my lessons with other people so we can all get better together. Those lessons aren't always welcome (even if they are true) , so I'm in the process of learning to share with those who actually want what I have to give.

Lately (as a result of my blog and my Twitter account, I think) I get LOTS of questions from other actors, and it feels wonderful to be able to share as much as I can. That instead of JUST being a student, I have absorbed and put enough into practice that my knowledge of my craft and my business are second nature to me. For so long I just had questions, questions, and more questions. Now I know that there will always be more questions, but I also know that I have a lot of answers as well. Not only can I get things done for myself, but I can tell others how to make things happen. And as I type I feel like it sounds "ugly." Society tells us it's not nice to toot our own horn, but not speaking the truth of this situation has become like a pebble in my shoe. I have to own it because it's true. If we admit the truth of who we are (or who we are becoming), then we can harness our power.