I Don't Even Know What To Call This Post. 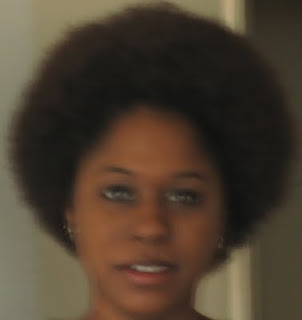 I keep starting blog posts, then abandoning them.  Now that I know I actually have readers (as opposed to when I first began blogging and wondered if ANYBODY was reading what I wrote), I so want to fill every post with tidbits of inspiration, and enlightenment.  I want to uplift and encourage.  I want each reader to walk away empowered and better for having taken the time to read "Living Truthfully."  I want to be better so that I have better things to share, more insight, and can help us all to be better.

I feel the need to offer more than "I had an audition today, and this is how it went."  That was fine when I first started auditioning, but the process isn't quite as shiny and new anymore & it feels like "me me me me me me I me I me I."  Ugh.  Who wants to to hear that.  Who NEEDS to hear that all the time?  Where's the value in that?  I do enjoy sharing my experiences and learning from the experiences from others, but if there aren't deeper lessons to be learned, it's all just talk.  And there's too much blah blah blah going around everywhere already.

So I haven't been posting.  I've just been alternately living, thinking, and avoiding.  I've been reading other peoples' blogs, examining truths (and in-turn recognizing falsehoods).  There are some really inspirational people* who have a lot to say, but being neither an über-cheerful, always-positive type, nor wanting to come across as a know-it-all, I've been silent.

But it doesn't FEEL right:  this holding back things that I know that I know to be right.  Not asking questions that need to be asked (because real truth will stand up to questioning).

Anything other than expressing what is true feels like wearing my shoes on the wrong feet.  So I'll do more of that, being sure to speak from a place of compassion rather than ego.  The former builds, the latter destroys. 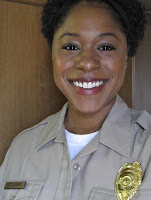 I shot an episode of new FOX show "Sons of Tucson" this past Tuesday.  I played an animal control officer (I am wearing a ton of makeup in a questionable shade in that photo).  The show is a mid-season replacement, so it won't air for awhile.  I'll let you know when, though.

I've been auditioning a lot, including commercial auditions - haven't booked a commercial since July '08!!  I'm making it, but my financial situation needs to change right now, if not sooner.  I have accepted an offer for a production gig that will take me to Chicago.  It doesn't sound like it's going to be too crazy of a job (knock on wood), and I get to go to my hometown plus see my family.  I'm pretty happy, but being broke really sucks.  Really.  It won't be this way always though - the pendulum swings both ways. 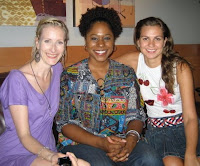 Last, but not least, I met fellow actress and blogger Julia Nalbach (left) this past Sunday!  What a truly wonderful and colorful human being!  She came to Los Angeles (all the way from Munich!!) to participate in a program, and we got together at a Starbucks in Burbank.  While participating in the program, she was assigned a roommate - also named Julia (right), and (get this) ALSO from Munich!  The three of us had a good time, chatting, laughing, and sharing, and being loud and silly.  We also met a really nice guy named Jay - a songwriter and professional background actor (I won't tell you how we met him - maybe one of the Julias will).  It was an intimate gathering among new buddies and it was really cool.

I will post more often, and will be back SOON!  I promise.  I've missed y'all.

*Just a few of the people that I find to be inspirational are: