In Remembrance of My Grandfather... 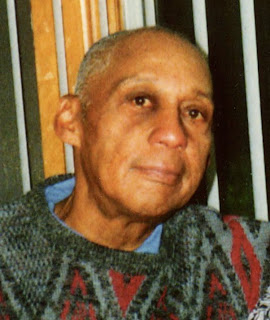 My grandfather passed away yesterday morning, the day after my birthday.  Until he developed congestive heart failure a year and a half ago (at the age of 81) he was healthier than most 40 year olds I know.  He lived alone, went where he wanted, whenever he pleased.  He was kind-hearted with a wry sense of humor.  His jokes would make you groan, then laugh, in spite of yourself.  He was reliable.  He loved to travel, loved music, and loved good food.  His thin frame made everyone wonder where he put it all.  But he walked all over Chicago, so calories had no time to take up residence.  He documented every era of our lives with his ubiquitous camera.  He was a hard-working man.  He was a former soldier.  He was a great father, and a great man.  He was eccentric.  He was fiercely independent.  He was humble.  He was proud.

So, for him to suffer for the past year and a half, increasingly dependent, and growing weaker and weaker until he could no longer even feed himself or hold a newspaper, was hard to accept.  My mother was with him day in and day out.  I saw him at the beginning of his decline, and then again a few weeks ago - just after his heart had been restarted.  Just before the DNR papers were signed.

Whatever one's person opinion of whether or not to take heroic measures to prolong the life of another, I'm sure we can all agree that QUALITY of life is very important.  There is a difference between "living" and "existing."  My grandfather, "Daddy Jim" had stopped living, and he knew it.  He told my mother "I've had a full life."  And he had.  Having lived every moment of his life, he knew the difference between living and existing.

So he will be laid to rest tomorrow, but the memory of him lives on.  We will miss his distinctive voice.  His hearty laugh.  His wisdom.  The junk he would find on the train and bring to us, bless his soul.

We will celebrate his life, and honor his memory by never letting his standards fall.  His size-thirteens are huge shoes to fill, and the only way we'll fill them is by also living every moment of every day of our lives.

My mother asked me to write a poem for the obituary.  I wanted to share it:


Daddy Jim – “The Gift That Keeps On Giving”

We will cry no sad tears

for your life was a gift

to those of us who remain.

Touched by your kindness, your humor, your presence,

we have all been forever changed.

With love in our hearts, we celebrate your life, and all that you taught us to be:

a father, a brother, a friend like few others,

a light for the world to see.

We will not dress in black

in honor of lack

as if today were the sum of your worth.

We will wear joy

for we know we were blessed

by virtue of your birth.

You showed us that the true measure of a man

was within the span of your hands

as you cradled us all with care:

always at the ready

whenever we needed you there.

And now we give back

and living as you would have us to live:

what a gift to give.