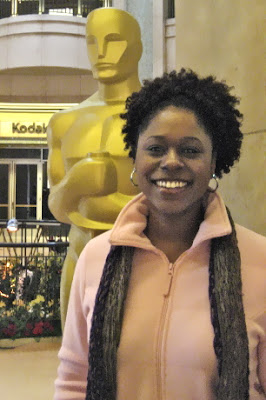 ...while I have a moment to breathe, let me fill you in on what's been happening.  The last time I wrote a blog post was exactly a month ago, to tell you that I had booked "90210."  Since then, I don't feel like I've even been home other than to sleep or prepare for whatever task was to come next.  Today I bought groceries for the first time in a month.  I've been eating all kinds of stuff on-the-go and have put on a few pounds that I now need to take off.  It has just been one thing after another in a (mostly) good way.

I shot "90210" and was placed on avail for a commercial that I really, really, REALLY believed I would get.  That shoot date came and went, so I guess they decided not to make it final.  I wasn't happy about it, but kept it moving.  I've had a nice number of auditions in the last month.  Probably about 15, including some callbacks (one is a little role in a pilot by a big producer), and another booking (a TV movie).  Through it all I've been working in production on the "NAACP Image Awards."  I've been asked to stay on another week, and possibly a week after that (the show is over, but there is wrap-up to be done), so my having to leave for auditions and take off for shoots must not be hurting my job performance.  It's the same as having two jobs at the same time and taking care not to shortchange either.  Tiresome, but important.  I've knocked out some bills that I wasn't able to pay because my money was funny (definitely not in the "ha ha" sense), and am determined to get this car paid off this year (as opposed to Nov. 2011).

So that's where I've been.  Today I left the production office early and went in to audition for "Cold Case" and felt good about my audition.  After I was done, the CD stared at me, then at his desk, then at me, then his desk again.  I was like "uhhhh..." (translation = "what in the world...?") & he held up a photo.  I was auditioning for a role that was the younger version of the woman in the photo, so we had to look alike.  Other than being the same shade of brown, we really didn't look alike at all.  I tried to slyly open my eyes a little wider and move my mouth to make my jaw a bit broader, but I probably only succeeded in looking crazy (had to try, right)?  He said "Ehhhh..." as he was trying to decide, I put my hands above my head so he couldn't see my (big, curly) hair anymore and could just focus on my face, then he said "I'm going to have to pass this time."  Oh well, there are some things you just can't control.  On to the next.

And the "next" thing is the pilot callback in the morning, and a commercial callback in the evening tomorrow.  My pilot scene was just re-written, so I need to go study it now, I just wanted to let y'all know where I've been.  I've been HUSTLING!