Why “Black Panther” Matters for Black America: thoughts for the rest of y’all 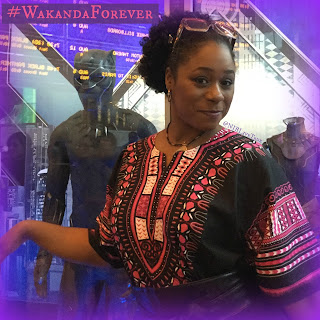 I’ve been typing and erasing for about fifteen minutes now. I just saw “Black Panther” and I am trying to organize my thoughts and emotions in hopes of conveying the importance of this movie at this time.

The history of African-Americans in the United States has been shaped, in large part, by our efforts to survive within a system that was not designed for us to do so, and to thrive when that very system shape-shifts at the behest of the powers that be, in order to prevent our advancement from occurring. History will show that those brave souls who step outside of this matrix and declare the emperor “naked” are gaslit, discredited, or cut down.

Were you treated this way for one day, what effect would it have on you? On your psyche? On the way that you rear your progeny?

We readily discuss the after-effects of events such as The Great Depression and the Holocaust. When, however, the talk turns to the mass enslavement of African people, too often the topic is dismissed as no longer being relevant: “Nobody alive today was a slave or a slave master.” goes the refrain. Never mind the fact that people of African descent were in chains for far longer than the lengths of the Depression and the Holocaust combined, nor that Jim Crow, and current discriminatory practices still act as invisible shackles. Black American people are told that every evil that befalls our communities is our fault and ours alone, as if we exist in a vacuum, and that our inability to pull ourselves up by our bootstraps is due to some intrinsic inferiority.

Were you told for centuries that you are inherently “less than”, what effect would it have on you? On your psyche and those of your children? If you saw the lynching of those who told you differently, would you speak up, or would you go along to get along? Might you tell your children not to shine too brightly, in hopes of keeping them alive?

We, African-Americans, have not been the writers of our own histories in this country. For MOST of our time here, we were not even permitted to learn to read and write, because there is power in the pen, and our captors needed us to feel as powerless as possible. Those who have the power can control the narrative. Those who write the history books determine whose history gets told and what will be omitted. Those who run the studios decide whose stories get greenlit and how the people in those stories will be portrayed.

“Black Panther” is a superhero movie, yes, but in the telling of this fantastical account:
A short, incomplete list - to be sure, but of very important elements.

I have no idea what that feels like in real life.

I, and everyone else, saw black people in a way that white people have seen themselves on every screen for at least a century:

as the default setting instead of an alternate.

Were you shown for a century that your beauty is determined by your proximity to qualities largely foreign to you, what effect would it have on you? How about your psyche and the self-esteem of your children? If you saw the silencing of those who told you differently, would you speak up, or would you straighten your hair to get a job? Might you tell your children to do the same?

Representation matters.
And not only “who” is portrayed, but also the “how” of the portrayal.

Representation matters because once you see a proxy of yourself on screen, you may reasonably assume that the actions and achievements of your proxy are possible for you too. For Americans of African descent have seen an overabundance of crack-ho, gangster, mammy, and sapphire-type characters, seeing ourselves in roles that celebrate our heritage in a dignified way is a mind- and game-changer.

I'm truly enjoying the design and layout of your site. It's
a very easy on the eyes which makes it much more pleasant for me
to come here and visit more often. Did you hire out a developer to create your theme?
Excellent work!

This design is steller! You certainly know how to keep a reader entertained.
Between your wit and your videos, I was almost moved to start my own blog (well,
almost...HaHa!) Excellent job. I really enjoyed what
you had to say, and more than that, how you presented it.
Too cool!