Get a REAL Job!

First, I want to preface this by saying that I did NOT get a callback for the Fruit of the Loom commercial. (All together now: "BOOOOO!!") Whatever. Next! 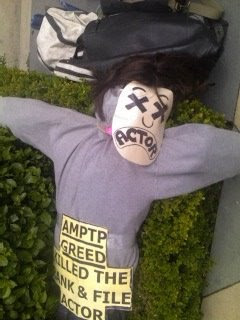 This past week, I received materials for voting for- or against SAG's proposed TV/ Film contract.

I started not to publicly state my opinions about this, nor how I voted (in case there's a Hollywood mafia and they come after me), but I just need to say something, so how can I put this delicately...?

I'll say it like this: If there was a "HELL NO" box, I would have checked it, but there wasn't, so I just checked "No" instead. (Delicate enough? I really wanted to see an "I don't effing THINK so!" box, but my mother reads my blog and frowns on that kind of language.)

There are several components of the contract with which I don't agree. I am failing to see why SAG is urging members to vote "Yes" on this, when it clearly does not benefit the majority of SAG members (mid-level actors).

Here's a YouTube video that quickly sums up one of the MAJOR problems:

Reading some of the comments left in response to the video, and recalling conversations I've had with various people (of differing opinions), I have decided that I will no longer even respond to asinine comments and insulting opinions given by those whose lives will be largely unaffected. There are so many nuances involved with making a living as an actor that I truly believe that (as with many things), it is best understood from the inside. This is not to say that all actors agree with my opinion, and I am more than willing to listen to/ discuss the pros and cons with people with who either truly understand or truly WANT to understand, otherwise, it invariably spirals into the idea that we are a bunch of overpaid whining prima donnas who are actors because we didn't want to get a "real" job. What is rarely said is that when most actors are not working, we are working at getting work. I work hard, I pay my own way, and I don't have to justify my career choice to anyone, so I refuse to have that conversation again with anyone.

That "Get a REAL job" comment rears its head periodically (though not as much as it used to before acting actually started paying some bills). It's funny - all the people who say it seem to fully enjoy the benefits of having professional artists in the world, but somehow any type of artistry is not a "real job." To those ignorant ingrates I say stop:

Don't do ANY of that, plus anything else that involves professional artistry of any sort. The best way to force those people to get a "real job" is to stop supporting the products of their "fake job".

And that bit about "overpaid"? HA! Yes, I'm well aware that when people see actors on TV, they think the actors are getting
P-A-I-D. A few are, most aren't. I will say that a day on the set pays more than a day I've worked anywhere else (and I've had a LOT of jobs), but we don't get paid for all of the work we do to GET those gigs. So theoretically, I can spend two months submitting myself for projects, driving around town, going to auditions, maintaining my business tools (website, headshots, business cards, resume copies, etc.) which usually involves money, all to get a one-day gig that pays (for example) $500. That's big for one day's work, but I've done two months of work to get that gig! Plus taxes, agent's commission, and manager's commission come out of that check, so I may get a check for around $240 when all is said & done. Obviously I can't live for two months on $240, so that's where residuals come in. An actor's image is the product being sold. If you can reuse my image wherever you want for as long as you want without paying extra for it, I consider that a problem. The pay on commercials is better (I voted "Yes" on the commercials contract), but this TV/ Film contract? I don't think so.