Been Around The World and I-yi-yi... 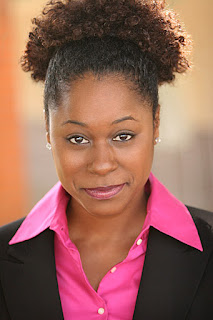 (For anyone who isn't familiar with the chorus from that early-90s hit song "All Around The World", I've included to a link to the CD: "Affection

I haven't really been around the world, I just feel like it!  I shot HBO's show "Funny or Die Presents" and I got to work with über-talented actor Romany Malco.  He's been on my radar (not in a weird, stalky kinda way) since the first season of Weeds.  Y'know how some actors have the ability to pull your focus in every scene?  No matter what's going on in the scene, my eye goes to him because his work is very honest.  Even when not speaking, he's paying attention & genuinely reacting to everything that's happening in the scene (instead of just waiting for his turn to say his line, which a LOT of actors do), and he's just very present in every scene.  Now, I would love to say that I booked it, I shot it without incident and everything was wonderful, but that wouldn't be entirely true.  The truth is that I had a minor meltdown the morning before I was supposed to shoot.  Thankfully I called a friend who talked me down off of the roof.  My concerns ranged from "What if I forget all of my lines??" to "This is the biggest TV role I've had so far - what if I suck??  What if I'm only good at little TV roles?"  The more my friend deflected my craziness, the crazier I got... until I heard myself.  And then I heard him.  And then I calmed down.  And then I laughed.  Ridiculous.

I got dressed, and drove to the house where we were shooting.  When we started working, I kept getting the note that I was "being too big."  I had to remember that I was working on-camera, and not onstage.  I reeled it in, reeled it in, and pulled it back.  I brushed away my ego (which was sitting on my shoulder, whispering in my ear "you're not doing it right") and I focused on doing what I was already doing, but smaller.  Romany asked me if I was familiar with Meisner repetition.  What???  Dude was speaking my language.  We started doing repetition (which is to acting what the alphabet is to reading).  We went back to basics, made it very simple, and I was able to find the sweet spot.  In the end, everyone was happy with the scene.  I was/ am disappointed that I didn't walk on set, do one BRILLIANT take without needing all of that, but all I can do is grow from that experience.  The show won't air until the fall - and I think it's going to be HILARIOUS.

You know the ABC Talent Showcase audition that I had?  Well, I got a callback!  This morning I had two auditions: the first was the ABC audition, and the scene they gave me was for a series-regular character playing opposite Forest Whitaker in the "Criminal Minds" spinoff (it doesn't have a title yet).  I worked this scene more than I've worked on any scene.  I even enlisted a friend of mine to work with me twice in the last 3 days.  Moving to the next level takes more than I've had to give so far, and I am so ready for this.  My second audition was for a co-star role for a new show called "Make It Or Break It."  Two auditions, back-to-back with very different stakes, and I gained some perspective:  If I move up the ranks and book the ABC one, my career will take off in a way that it hasn't yet.  If I book the co-star role, it will be one more solid credit on my co-star-heavy resume.  Either way, I'm still the same actress.  It's a real trip to realize that one audition can change the course of your career, and also to realize that you have to think of it as "just one more audition" in order to stay focused on the task at hand.

Whatever the outcome of these particular auditions- I'm still in the game, I've worked long and hard to get here, and I know that I belong here.