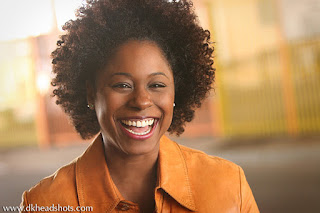 On Monday night, my manager called me and told me that I was going in to see the producers of "Weeds" on Tuesday.  It was an itty-bitty one-line co-star role, but "Weeds" is one of my favorite shows, so I was still happy to be called in.  I worked on that one line a few different ways, and put it to rest for the evening.  The next morning, I had a dentist appointment (clean bill of health!), then I stopped at Starbucks for a coffee*, and to look over my script again.  Right before I was about to get into my car and head to my audition, "Weeds'" old theme song (they changed it at the beginning of... season 4, I believe), Little Boxes

, came on.  I've been to Starbucks many, many times, and I have never heard this song played.  I laughed, then I sang along with it - probably louder and with more animation than was socially acceptable, but I didn't care.  After it was over, I drove to my audition.

I parked on the street and walked on to the lot (after showing I.D. to the guard, of course).  When I arrived at the building where the audition was being held, there was a cheerful young woman outside with a clipboard and bottles of water.  I've never had a reception like that for an audition.  I signed in and went upstairs.  There was a cheerful young man, also with a clipboard, and offering me water.  I thought it was funny that a show about, well, WEED would have the most cheerful casting assistants in town, and would also be the only one that has ever offered me anything ingestible.  I am not implying that they were high**- I just thought it could be a funny "sitcom-ish" moment.
I put that out of my head, and focused on the task at hand.  A huge angry man went in before I did, and auditioned for whatever he was there to do.  Then it was my turn.  I went in, and again, everyone was nice.  Most times, when there are a bunch of people (casting, producers, writers, etc.) in the room, only a few of them say "hello" or anything to you. Everyone greeted me, and there were genuine smiles all around.  First the slate, then I read with the casting director, Dava Waite Peaslee.  This is where my Meisner training stepped up to the plate.  Personally, I believe that auditioning for a role and actually doing the work once you have the role require two separate technical skills sets.  I had practiced it a few different ways, but at the last moment, I felt like a different choice would be more true, so I had to do it.  I was playing a customer outside of a stadium, with my child yelling for me to hurry "we're gonna miss the start of the game" or whatever, right?  My action was to purchase much-needed marijuana from one of the main characters.  I decided to keep my purse, place my (imaginary) child to the side of the room where most of the people were (away from the camera), then turn back to the casting director (setting near the camera), urgently buy the weed, then turn and begrudgingly trudge back toward my child.  Everyone in the room cracked up, and when I was sure that it was okay to break character, I cracked up too, lol.  It was funny, and it was right for the moment.
Was it right for the part?  I don't know.  They haven't called to book me yet, so perhaps not.  Regrets or second-guesses?  Nope.  Why waste energy on that?  I prepared, I assessed the situation, and I delivered the best performance I could.  I'm going to choose to believe that if I don't book it, it's because I've shown that I can handle more than just one little line.  I'll believe that because it serves me.
And if they call me in again?  I'll go, skipping all the way!  In my book, they're now in competition with Disney for the happiest place on earth.  I'll have whatever they're having.
--Nicole

*okay, it was coffee and a donut.
**these people were NOT high, just happy.