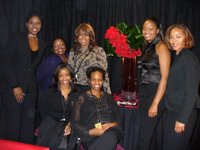 
It was, once again, an elegant affair. To be in the same space with great artists such as Cicely Tyson, Ruby Dee, Laurence Fishburne, Loretta Devine, Lynn Whitfield, Angela Bassett, Kimberly Elise, and Spike Lee (just to name a few) is something that I never would have thought possible just 5 years ago. I don't get 'starstruck' (except for that one time I had to interview Common--I acted like a plumb fool) but I do recognize and respect artistry when I see it.

Last night I went to a screening of Tsotsi, which was followed by a Q & A with the lead of the film, Presley Chweneyagae. If you haven't seen the film, GO SEE IT!! I LOVED it, and Presley, only 19 at the time of filming, is definitely one to watch. The Q & A proved him wise beyond his years.

Once again I am inspired. That's what art should do. Inspire and incite.